This book is, in my view, the best and most complete guide to Gouldian Finch genetics available.  It got me off to a great start with learning about mutations.

However, I find the excellent information to be presented in a very disorganised, chaotic and confusing manner, requiring extraordinary effort on the part of the reader to make sense of it.

So, to save my fellow finch breeders the same effort I've expended, below you will find an organised and simplified interpretation of the key information.  I've also added details from other credible sources, to complete the picture.  I hope you find it helpful.

Dominant:  Only one parent needs to display this colouring for their offspring to display it. 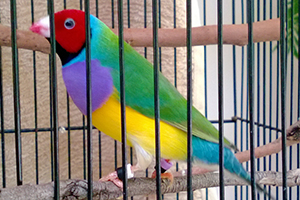 All Normal markings are present:

The cock's back is a rich medium Green with slight iridescence.  The hen's back is a less intense Green.

The cock's breast is intense deep Purple.  The hen's breast is a lighter and more subdued Purple.

Some males will show a fiery Red-orange line between their chest and belly colours. 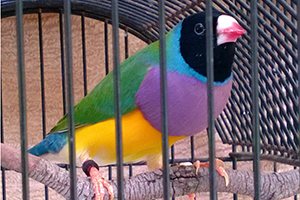 The head of both sexes can be either jet Black (sex-linked recessive), bright Red (sex-linked dominant), or Orange (sometimes called Yellow) (autosomal recessive).

The tip of the cream beak is usually Red, unless the bird displays or carries the Orange-head gene, in which case it has a Yellow-tipped beak (YTB). 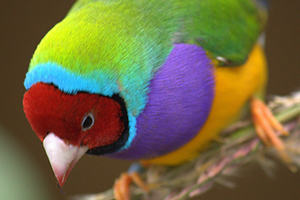 There is a band of bright Turquoise-blue behind the head of the male.  Hens have a thinner and more subdued blue band.  Their tails are a similar blue. 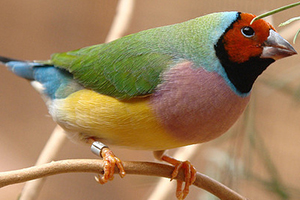 The pencil line between the head colour and the blue band, and the area under the chin, are Black in both sexes. 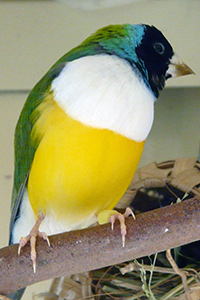 A common variation is the White-breasted Gouldian, in which the purple chest is replaced by bright White.  It's a recessive trait, meaning both parents must display or carry the white-breast gene for their babies to display it.  This is a beautiful variation and easy to breed.

A less common variation is the Lilac breast, in which the purple chest is subdued.  It's a recessive trait that seems to be linked in some way to the White breast gene.

Babies are Olive green when they fledge.  They develop their spectacular adult colours during the annual moult in early Summer. 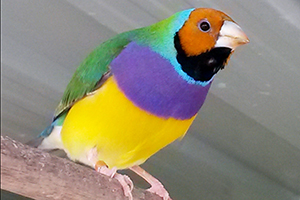 Orange-headed birds are the least common, because this is a fully recessive trait.

When red and black-headed birds are bred together, the red heads of female offspring sometimes look ‘dirty’ — they have black blended in.  Likewise when breeding orange and black-headed birds.  However, this seems to be avoidable with selective breeding.  With a little care, hens with clean red or orange heads can be easily produced.

The beaks of females turn a deep Charcoal grey in the Summer when they are in breeding condition.

Autosomal recessive:  Both parents must either display or carry this mutation for their offspring to display it.  There is also an argument for this being a PARblue (a partial blue, rather than a true blue). 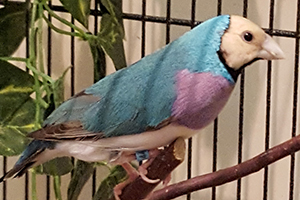 All Green feathers are replaced by Blue feathers.

Red and Orange head feathers are replaced by Beige.

Yellow belly feathers are replaced by Cream or Beige.

Some claim that split Blues (birds that carry one copy of the recessive Blue gene but do not display it) can sometimes be identified by those with good colour vision, usually women, by a subtle blue/dull wash through the green feathers.  Most disagree!

It is vigorously debated whether most or all Blue Gouldians have an immune system fault that means they can only be kept alive in unusually clean, climate-controlled environments.

The experience of most Australian breeders is that Blue-backed Gouldians are likely to die in outdoor aviaries and babies rarely make it beyond a few weeks, unless they are kept warm and their enclosure is regularly fogged with a sterilising agent or the birds are medicated.  Hence the very high price of this mutation — most die young, making them rare.

Some also observe that Blue Gouldians may display cognitive deficits in the form of reduced adaptability and survival behaviour.  This could be caused by inbreeding by breeders trying to produce more of these valuable birds, or by cabinet-breeding (a low-stimulation environment in which birds fail to learn basic skills), or it might be a facet of the mutation itself.

Blue mutation Gouldians are not recommended for beginner finch keepers.

Uncertain.  Possibly an autosomal recessive PARblue (a partial blue), or it may be acquired (an unusual response to environmental conditions).

Green feathers are replaced by a compromise between blue and green — a dark Turquoise.

Red and Orange head feathers are slightly reduced in intensity.

This colour form is rare.

Co-dominant, sex-linked:  The gene is always expressed, although differently in male and female birds. 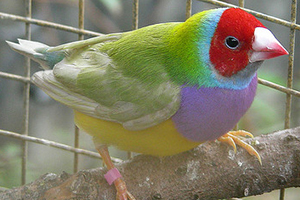 Pastel genes cause dilution of any back colour, be it Green (called Pastel Green or European Yellow), Blue (called Pastel Blue or Silver), or other variations.

Hens are always Single Factor (SF) — they carry only one gene. 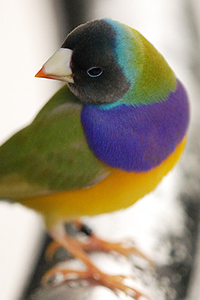 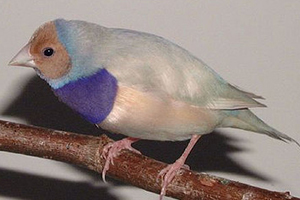 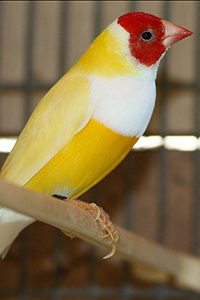 Although the recessive Dilute mutation (see below) is phenotypically (visually) similar to a SF Pastel Green cock, it is genetically unrelated.

Watch out — North American breeders often refer to SF Pastel Green cocks as Dilute, because it's a natural description for a bird with this appearance — and because the Australian recessive Dilute (see below) does not exist in North America.  This can cause confusion when swapping notes with international finch enthusiasts.  Using the term Pastel helps to avoid this confusion.

A genetic lethal factor appears to exist that causes the death of a significant proportion of embryos from pairings of DF Pastel cocks with SF Pastel hens.  It's unclear whether this is a true lethal factor, or whether it might be the result of slight inbreeding of yellow birds.  Finches are very vulnerable to declining fertility/viability when closely bred, even when this inbreeding is quite minor.  See this study:  Damaging effect of inbreeding in birds vastly underestimated.

Autosomal recessive:  Both parents must either display or carry this mutation for their offspring to display it. 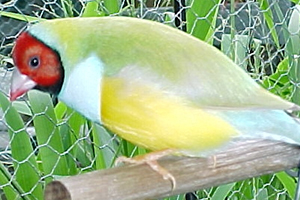 Breast and belly colours are the same as Normal birds.

Due to the confusing action of the two genes, White-breasted Dilutes show grey pencil lines and grey head feathers approximating 85% of Normal colouring.  That is, a much darker grey than on Purple-breasted Dilutes.

Babies have reddish eyes – an albinism trait, rather than truly dilute.  However, their eyes darken with age.

Juveniles are a creamy Fawn.

When chatting with international finch-keeping friends be very careful with terminology, so as not to get confused between this mutation and SF Pastel Green birds.  Read the Notes section under Pastel, above.

This is a rare mutation.  It's believed to be found only in Australia.

Autosomal recessive:  Both parents must either display or carry this mutation for their offspring to display it. 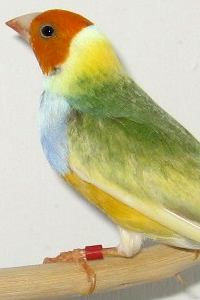 All Black markings are replaced by White.

The Purple breast is replaced by White.  This is unrelated to the White breast gene.

Most young and some adult birds have Green variegation across their shoulders and back, and some Grey pencil markings.

They have almost White flight feathers — the long feathers on the lower edge of their wings.

Many, but not all, split Australian Yellows (birds that carry only one gene so do not display it) have an obvious patch of White under their chins in the area that is usually Black, and/or Whitish toes.  These are useful ways to identify them.

Australian Yellow can blend with, and be hidden under, Pastel genes.  This makes breeding results unpredictable.  It's highly advisable to house populations of these two mutations separately.

This mutation is considered to be unknown outside of Australia, although some birds are rumoured to have been found in Europe and the USA.

Want to see these birds in action?

This video showcases a beautiful collection of mixed Gouldian Finch mutations.  See how many different types you can spot.

Other names for the Gouldian are Gould's Finch and Lady Gouldian Finch, after ornithological artist John Gould and his wife.

Finch Stuff is always on the lookout for excellent Gouldian photos.  This page needs a nice photo of a Seagreen Gouldian.

To contribute to this guide, please send in your photos.

Thanks to these folk for contributing to this guide